Fighting entrenched industries is no easy task, not even for governments. We all know how long it took the public interest sector to win campaign battles against tobacco; and the war is not yet won. The artificial tanning industry is no less of a behemoth. For years they have managed to keep our psyche convinced of the upside of a good tan and the added safety of an artificial one. Indeed, for every attack, they have managed to stage a clever, albeit deceitful, counter attack. Fortunately, many are not giving up and are fighting back. One such fighter is The Big Burn campaign waged by Canada’s Alberta Health Services.

Upon landing on The Big Burn homepage for the first time, you will be forgiven for a moment of doubt; you might ask: “Am I on a pro or anti tanning site?” It looks so real and professional, that one could easily believe to be on a promotional site that is extolling the virtues of, for instance, tanning before a vacation. Several details such as the disinfectant bottle or well folded towels, seem to confirm the cleanliness, elegance and safety of the environment. Clearly, this is not a negative webpage. Or is it? 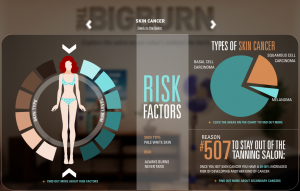 Move your mouse a little, over the various bullseye icons,  and soon you start to realize that the site is, in fact, not so tanning friendly. Melanoma, aging, bacterial contamination and the rebuttal of a base tan as a form of protection set the new mood: this site is about to reveal more nefarious aspects of artificial sun tanning. As you click away, a very well designed set of graphics begin to appear spewing fact after fact. Many slick communications techniques are, in fact, used such as mentioning that a fact is actually fact #509 against the benefits of artificial tanning.

What is, however, lacking on this campaign page is a strong call to action. There are buttons to share the page on social media and a link to the Alberta Health Services on the bottom left. But the site lacks the necessary advocacy component. “You have my attention, now what do you want me to do? Just avoid sun beds?” Sure, as a straightforward public awareness and behavior change campaign, it does work, it informs me, but in today’s war, this is insufficient. Such a well produced page should incite me to spread the word more. It should connect me to policy makers. It should bring phone number to my local Better Business Bureau encouraging me to call them. At the very least, it should integrate me into the broader coalition of scientists and advocates who are taking on the sunbed industry.

The good news is, campaigns such as this one, encourage other campaigners to use ever evolving tactics; we haven’t won the war, but thanks to organizations such as Alberta Health Services, we’re making noise.

DISCLAIMER: This campaign analysis is provided by an external communications analysis specialist, not by iPRI’s scientific staff. It is intended as an analysis of a campaign, not of the scientific details or merits of said campaign.

As of 30th April 2020, we said goodbye to our colleague Frédérique Delbart. She left…

Rajendra Badwe is Director of the Tata Memorial Cancer Centre in Mumbai, India. He was…

The fourteenth annual NCID meeting took place in Lyon between 10-12th July, 2019. There were…

Ten Years of iPRI in video

iPRI is pleased to be entering its tenth year of academic and scientific endeavours. We…

Regional Ministerial Conference on Partnership and Cooperation in Oncology

Declaration in the Fields of Oncological Training, Research and Development among the Countries of the…

VP Biostatistics Gilles Guillot was born in Lyon, France, and received a degree in data…

Internships in Biostatistics and Epidemiology

The International Prevention Research Institute (iPRI; www.i-pri.org) is an independent research institute with an outstanding…