Breast cancer has been known and written about for millennia and has been the subject of research into its treatment and causes for centuries. Despite all this interest and activity, breast cancer remains a major and growing threat to global Public Health. This Report set out to take a broad look at the global situation of breast cancer currently (2012) from both the treatment and prevention perspectives. While there is much good news, there are also some deeply disturbing aspects which require urgent attention. Breast cancer is a major global problem which requires much more attention particularly in view of the disparities which exist and the rapidly increasing incidence and death rates.

Major themes running throughout the World Breast Cancer Report 2012 are the global nature of breast cancer; the rapid increase in incidence; disparities in awareness and response to symptoms among women; disparities in the availability of diagnostic facilities and treatment options and availability; and major disparities in breast disease cancer outcome.

Many of the reports from lower-income countries highlight the late presentation of women with breast cancer to treatment providers, frequently at such an advanced stage of disease that the only treatment option is palliation. It is also clear that low-income countries lack adequate treatment facilities and when treatment is possible, the range of options is limited and, frequently, not state of the art. The large proportion of women who present with stage IV disease is much higher in lower-resource countries than in higher-resource countries. A further disparity in many low-income countries is the lack of any significant palliation resource, including an absence of a radiotherapy machine and no access to opioid medication. Paracetamol is really not an effective option to treat the pain frequently associated with terminal cancer.

Prospects for primary prevention of breast cancer remain limited. Risk factors such as age at menarche, age at first birth and parity are not easily modified at an individual level. Careful use of Hormone Replacement Therapy and Oral Contraceptives would limit risk increase although it may be expedient to look for alternative therapies that do not have increased risk of breast cancer as an undesirable side effect. Moderating alcohol consumption would also decrease breast cancer risk while avoiding overweight and obesity and increasing physical activity would lead to decreases in risk. An increase in time spent breast feeding would also reduce breast cancer risk but with a global tendency to breast feed each child for a shorter period and to have fewer children, the major benefit of this lifestyle choice seems limited currently.

Screening programmes with mammography seem to be effective in increasing breast cancer awareness in women and their introduction has been associated with a reduction in breast cancer mortality. Clarification is still required regarding the effect of over-diagnosis and over-treatment but, nevertheless, such programmes are not an option for lower-income countries at the present time. Reducing breast cancer risk by chemoprevention is a theoretically attractive strategy but the success of these interventions to date has been limited by the negative side effect profile. 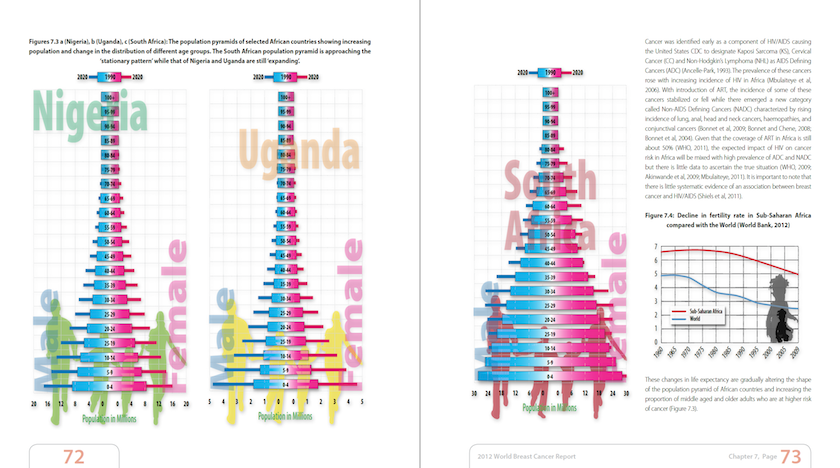 It is estimated that more than 425,000 women currently die from breast cancer each year. Despite the larger proportion of new cases being diagnosed in the developed countries, the burden of breast cancer deaths is equally divided between the developing and developed world. Increasing population size and life expectancy, accompanied by a decrease in stigma, an increase in awareness and the introduction of effective early detection programmes in lower-resource countries will lead to an increase in the numbers of new cases diagnosed.

The report can be purchased from the International Prevention Research Institute (iPRI). The cost ranges from EUR 20 to EUR 80 based on the resource level of the country of residence (we follow the World Bank definition). If you are interested in purchasing the 2012 World Breast Cancer Report, please email comm@i-pri.org with your name, institution and address. We will promptly reply with a cost estimate including packaging and postal delivery. Note that the report was printed in limited quantities.

MOU with Ukraine’s RE Kavetsky Institute

Melanoma Deaths Could Fall by 2050

This 5 December 2016, in Nadarzyn, Poland, two European-based organizations with a long-standing commitment to…

On November 8th, 2016 the world lost one of the great men of modern Medicine…

VP Biostatistics Gilles Guillot was born in Lyon, France, and received a degree in data…

Internships in Biostatistics and Epidemiology

The International Prevention Research Institute (iPRI; www.i-pri.org) is an independent research institute with an outstanding…